Face Value
I FIRST saw it in a Marcel Antonio work in 1999, a Chagallian red painting titled  portraying a female figure in the center being subtly surprised by a kiss from a vague other female figure. Chagallian composition would stay with Antonio to the present, either as a means of liquefying a color composition when things become so Picassoesque-ly rigid or to confuse gravity when gravity gets in the way of proper visual “storytelling”. Early Picasso, who in turn was influenced by the colors of Velazquez, seems likewise a major influence. Antonio employs all his influences’ devices for his recurrently and often horizontal rectangular stage or silver screen dramas. 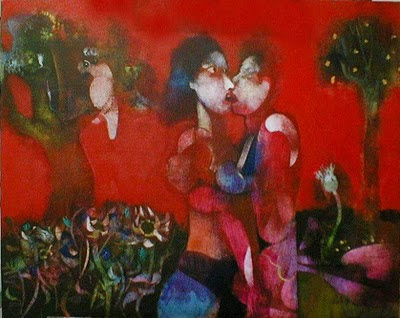 
These face-derived figurative dramas do quote hand gestures from classical painting, even while they may still be deemed contemporary expressionist oeuvres. And Antonio decorates his scenes with all the props and accoutrement of scenography, quoting—in the 1980s fashion of appropriation—sources ranging from de Chirico to Carravaggio for this, his theater of subtle “expressionism”.
But how expressionist is Antonio? He had, indeed, been lumped with the young Filipino expressionist wave of the 1990s which included the likes of Elmer Borlongan. But while some in this bunch went in the direction of Picasso’s Guernica or Munch’s Scream or expressionist social realism, Antonio chose (consciously or unconsciously) the restrained trance eroticism of his unsmiling “expressionist” faces as carriers of his compositional puzzles-cum-evocations.
By eroticism I do not mean the kind that evokes but the kind that seems (and only seems) to threaten to evoke. Meaning, an erotica that’s interactive: not so much author-induced as communally agreed on, like private jokes. Recurrently, classicist nude figures with reading-inviting faces also do not so much narrate a literal going-on as suggest a narrative, in spite of literature-inspired titles that challenge his compositions’ independence from rigid allusions. Thankfully, always the compositions win over the titles, with the works daily gaining independence from the painter’s guidance-by-titling.


Protest Against Indulgence
There have been paintings like 1999’s The Chinese Chamber that allows a Rembrandtian drama to unfold in more expressive ways, but even there Antonio avoids throwing caution to the wind, coming up instead with something like quiet J-horror. 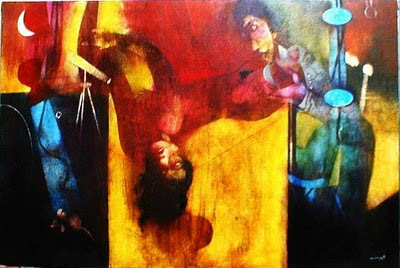 
Also in 1999, Antonio experimented with portrait figures with abstracted or vague bodies and relatively-distinct faces, as in a work called Scissors. With the drama here turning Japanese, my reading on Antonio’s dramaturgy as concerned more with his models’ facial portraits (as actors acting out the painter’s play) than with their gestures was underlined and confirmed. Even his nudes, being nudes that should be calling attention to the body, were more evocative of sleep, pushing thus the eye/face to take the lead role, at least in effect. Think “mood” acknowledged as eroticism’s prime carrier without which the literal body is mere meat. And as a way of paraphrasing this primacy of the figure’s face, Antonio transferred this early facial focus to a cat in Cultured Cat. 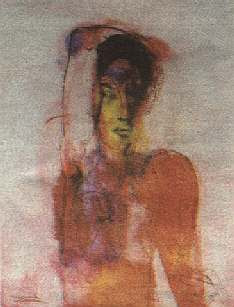 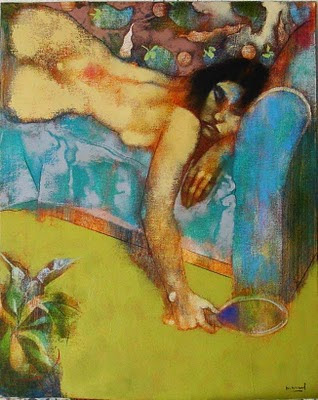 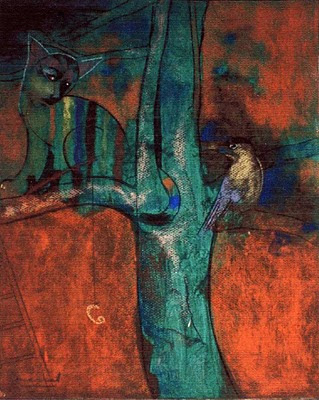 
Expansive Ennui
But by July of 2000, an Antonio show called “Langue et Parole” was already incorporating his father’s cubism into his actors. Now supported by a growing following, the figures on his now-larger canvases multiplied, manufacturing a drama of selves and canvases as synchronous collectives, introducing in turn an Antonio-esque kind of populism within a trance that departed from the folk happiness of his mother’s (Norma Belleza’s) marketplace colorist treatments. I was, however, more interested in the evolution provided by an earlier-by-a-month show at the Drawing Room, which featured a painting that graced the invite card to the show. A line drawing of a woman drenched in white, foregrounding a blue wall, not only highlighted a signature Antonio blue-funked face but introduced method acting into his portraiture. In this painting, the woman looks to be in the process of undressing, specifically of removing her right boot. Antonio’s blue-funked camera obsessed with the mysteries of the face was now focusing on the entire body’s stage show. 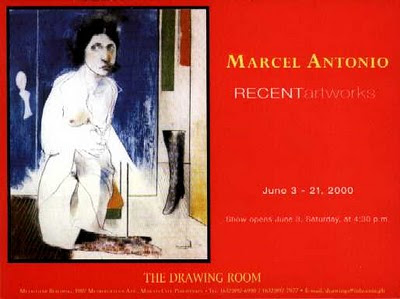 And so props entered the acting process, not merely as decors beside the figures as in the previous year but, this time, as the figures’ fetish instruments either held or faced: candles, knives, mirrors, flower vases, paper, etc. The facial drama had conscripted not just the body but objects as well. 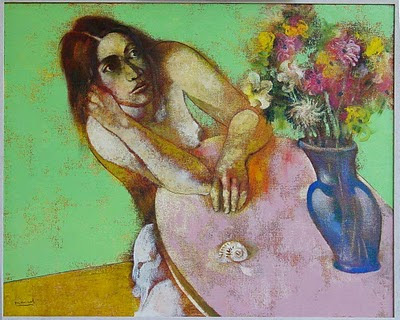 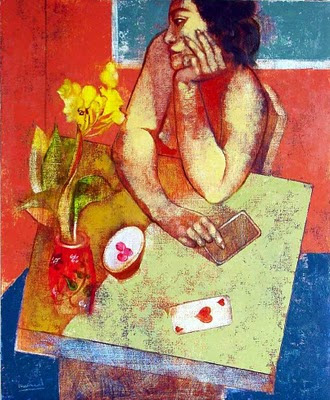 Years later, circa 2004-05, Antonio was still churning out the same dramas, this time via fetish paintings with de Chirico-inspired imagery. His figures became more contoured, further reminiscent of either early Picasso or 1940s commercial art. But in some of these works, the figures looked distant, more aware of events in their minds than of objects around them. In one painting that featured none of this pensiveness but a male-female couple happily playing cards, the issue of viewer-and-actor non-mutual engrossment was introduced, with the viewer engrossed in the contours of the central female’s body as well as her red hair's ribbon while she, in her turn, was engrossed in her cards. A three-of-hearts card faced the painting viewer falling in love with this woman-figure, but she for her part was more interested in her ongoing venture to win at cards, unhindered even by the lady passing by the couple’s window in the background.
In 2008, Antonio’s show—which the poet Alfred Yuson wrote about under the heading “Painter As Narrator”—went back to cubism, more colorful this time, as if to place his rectangular dramatic theater within the restraining confines of cubistic rigor. Call this his narrative art paying homage to his father’s (Angelito Antonio’s), as well as Cesar Legaspi’s, type of Picabia-looking Filipino cubism.


The Final Trimmings
Then came that 2009 exhibit called “Sturm und Drang.”
Still the same old blue-funked trance painting that Antonio fans expected, you might say, but the figures in the horizontal or vertical collectives suddenly possessed enhanced characters as individuals (that is to say, each figure or figure-compound seemed to want to audition for the painting composition’s star role). 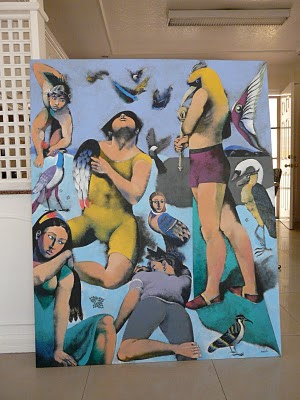 The painter, talking to this party-crasher, did admit that these “stage plays” were still culled from his wont to quote classical as well as contemporary literature, but admitting further that his mannerist interpretations seemed to also tickle his fans, to which the gallery kowtowed. But I was not to be taken in by conventional appreciation and had to admit in my turn that here was Antonio stunning me with a slow emergence from a restraining chrysalis. Not towards Munch or the violence of de Kooning, of course, but to a narrative painting field where narration merely becomes a further excuse, this time with the excuse proposing an earthquake-shattered stage through a confusedly multi-leveled floor space, and that confusion echoed as well by indistinct wall spaces. Confused, I say, not in a cubist way of fragmenting cognition but in a neo-surreal manner intent on suggesting the storm of inner minds.
So the blue funk had expanded its wings from melancholia into that other meaning of blue funk: confusion. It had found beauty in confusion, as did Chagall, not so much to tell a story, as we said (again, despite the titles and some of his fans’ clamor for further book illustration), as to distribute the influence of his blue-funkism. This influence had traveled from the face to the body to the trimmings of characterization and to spatial management, on to the expansion of moods.
Sure, not all of Antonio’s pieces would fit into this category of ennui and melancholia, and those other pieces would be hailed by some collectors (those hailing this review and perspective) as anomalies to possess. But in what to me are his best works from the recent collection at the “Sturm und Drang” as well as the July 2010 Glorietta ArtSpace show, pieces like Café Ennui, All That Matters, Centuries and I’m The Mad Man’s Mire Drug, likewise the three excursions into Pop art—Soda Pop, Shadows and Steam—, are vehicles enough for me to herald the increasing influence on many a wall of Antonio’s expanding trance erotica. This erotica should stay around and keep us entranced, being not so much one that tickles the groin as a kind that promotes the understanding that every face, gesture, object, color, and shape is a secret sex object and clandestine true story waiting to be told, regardless of whether that erotic telling even includes death (as would a Nobuyoshi Araki). 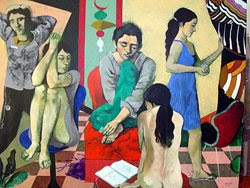 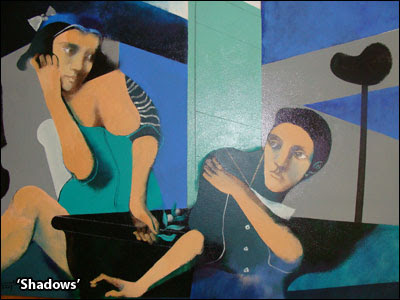 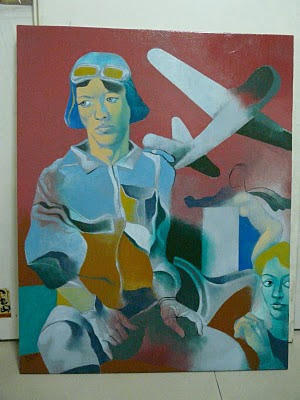 The Famously Narrative Artist As Anti-Narrative

But to reduce Antonio’s art as pure content narrative serviced by a formal acumen is to deny the strength of formal inspirations that lead artists to their content management. Thus my refusal to box him with narrative art; and campaigning, instead, for boxing him in with those who’ve moved towards anti-narration. In Antonio’s case, his blue funkism's “de-expression”, or “dis-expression” and narrative confusion through the mannerisms of illogical narrative imagery and titling, seems to be a produce of a Russian Formalist narrative bent of “defamiliarizing” images and shapes towards a higher enigma. Thus his refusal to “express”.
To paraphrase, if the formal part of Antonio is looking for ways to defamiliarize, that is to say, to make mysterious the familiar and mundane by mathematically arranging images to thus achieve their respective interesting positions on the plane, the facial-content part of his imagery meanwhile achieves that defamiliarization of the known literary or everyday or celebrity image by opening the faces up to a variety of narrative possibilities via an “expressionist absence”, as it were. That seems to be Antonio’s way of deconstructing narrative art to arrive at his own sort of narrative or pseudo-narrative, delivered by way of silences instead of via the noise of his titles’ text. ### 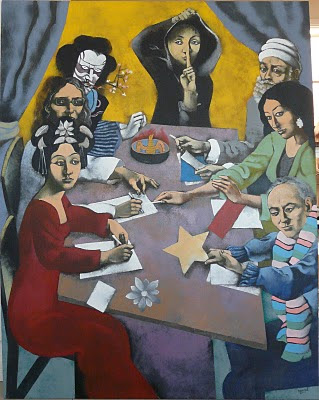 The Blog Posts By Subject